Q: Who gave Xcaret its name?
A: Two lost Americans with a bad map

From the first time the Spanish set foot in the Mayan village of what we now call Xcaret, they called it Polé or Ppolé, from the Mayan root word p’ol, which means “merchandise” or “trade” in Yucatec Mayan. The village was first reported by Juan Grijalva, who saw the buildings in 1518, but did not land. Francisco el Adelantado spent several weeks there in 1527 and 1528. He too referred to the Mayan town as Polé. His son, Francisco Montejo the Younger, visited the town in 1543 and continued to call the town Polé. Polé was listed on the 1549 tax census (population 76) and again in a report by Padre Cristóbal Asensio in 1570. In 1582, Polé was listed as having one of only five churches of the entire coast of Quintana Roo. In 1571, the name Polé is recorded once more when several Maya from the town testified in the trial of the French corsaire Pierre de Sanfroy. In 1590, documents list the batab of Polé as Diego Malah. In 1601, the batab of Polé was listed as Juan Ye. The first map showing the location of Polé was the Juan de Dios Gonzalez map of 1766. The name Polé remained on maps through the 1829 Lapie map, the 1843 Catherwood map, the 1864 Malte-Brun map, the 1874 García Cuba map, and the 1878 Berendt map. This last map, however, contained a serious error; all the towns along the coast were shifted 35 kilometers north of their actual positions. Unfortunately, it was this 1878 map of Berendt’s that Gregory Mason and Herbert Spinden used on their Mason-Spinden Expedition, when they traveled for two months along the Quintana Roo Coast, recording Mayan ruin sites and collecting bird specimens. When they came across the ruins at Polé, the map they had in their possession showed the town of Polé was 35 kilometers to the north of its actual location, and the map showed nothing of note where they were standing. 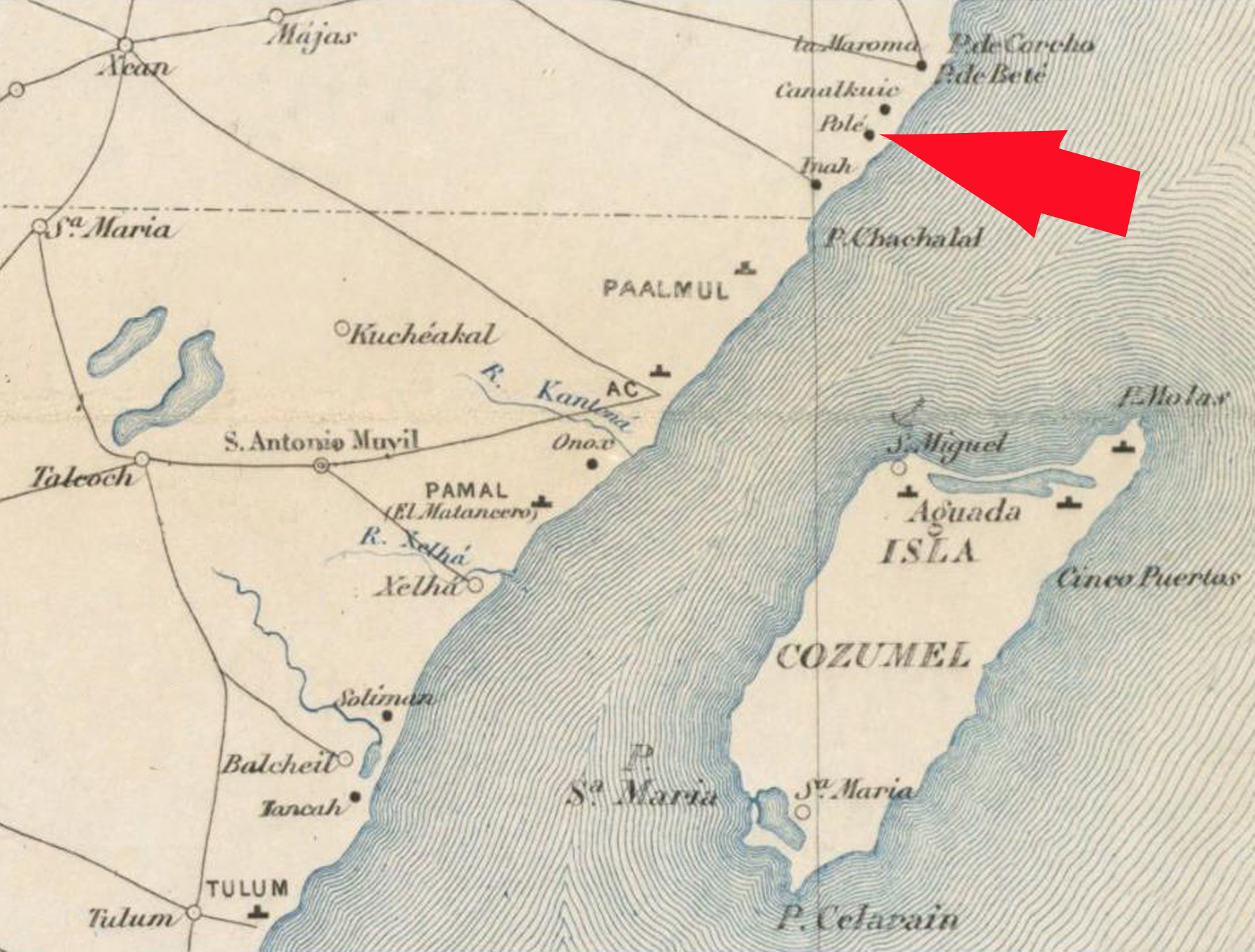 Above: Carl Hermann Berendt’s 1878 map of Yucatan had Polé placed 35 kilometers too far to the north.

Unaware they were looking at the ruins of the same buildings that the Montejos and others had called Polé, they christened it the “new” site Xcaret, after a small ranch nearby.  The name stuck like glue.  For many years after Mason and Spinden published the map of their expedition showing Polé and the Xcaret in two different places, other cartographers followed suite, locating the same town, now with two different names, in two different locations, miles apart from each other.  It has only been since the 1960s that the two locations of the same town have been rejoined and repositioned in the correct location, but now with the wrong name; Xcaret.