During the last ice age twenty-thousand years ago, prehistoric Cozumel looked much different than it does today. I‘m not talking about the manmade changes; I’m talking about the shape and geography of the island itself.

For one thing, the sea level twenty-thousand years ago was 400 feet lower than it is today. That means the outer edge of the underwater shelf (what today’s divers call “the wall”) surrounding Cozumel and separating its coastal shallows from the 3000-foot-deep channel lying between the island and the mainland was a dry cliff-face back then. If you were standing at the edge of this sheer cliff twenty millennia ago, the surface of the ocean was a dizzying 300 feet below. That is as far as the surface of the ocean is from the top of the Statue of Liberty’s torch today.

The highest point on Cozumel now is only around 45 feet above sea level. But back then, if you looked out across the water from the mainland at Cozumel, it wouldn’t look like the low-lying blip on the horizon you see today. The island would have stood almost 450 feet above sea-level, a massive block of limestone standing proud of the sea, similar to the image below:

Cozumel was not just higher back then, it was longer and wider. The sea has since risen and covered the shoulders of the island that sloped towards the once-dry cliffs, just as the sea now covers all the flatter area north of the island. Not only that, but Cozumel wasn’t the only island in this area. At least six other islands were scattered around nearby that are now just underwater seamounts. 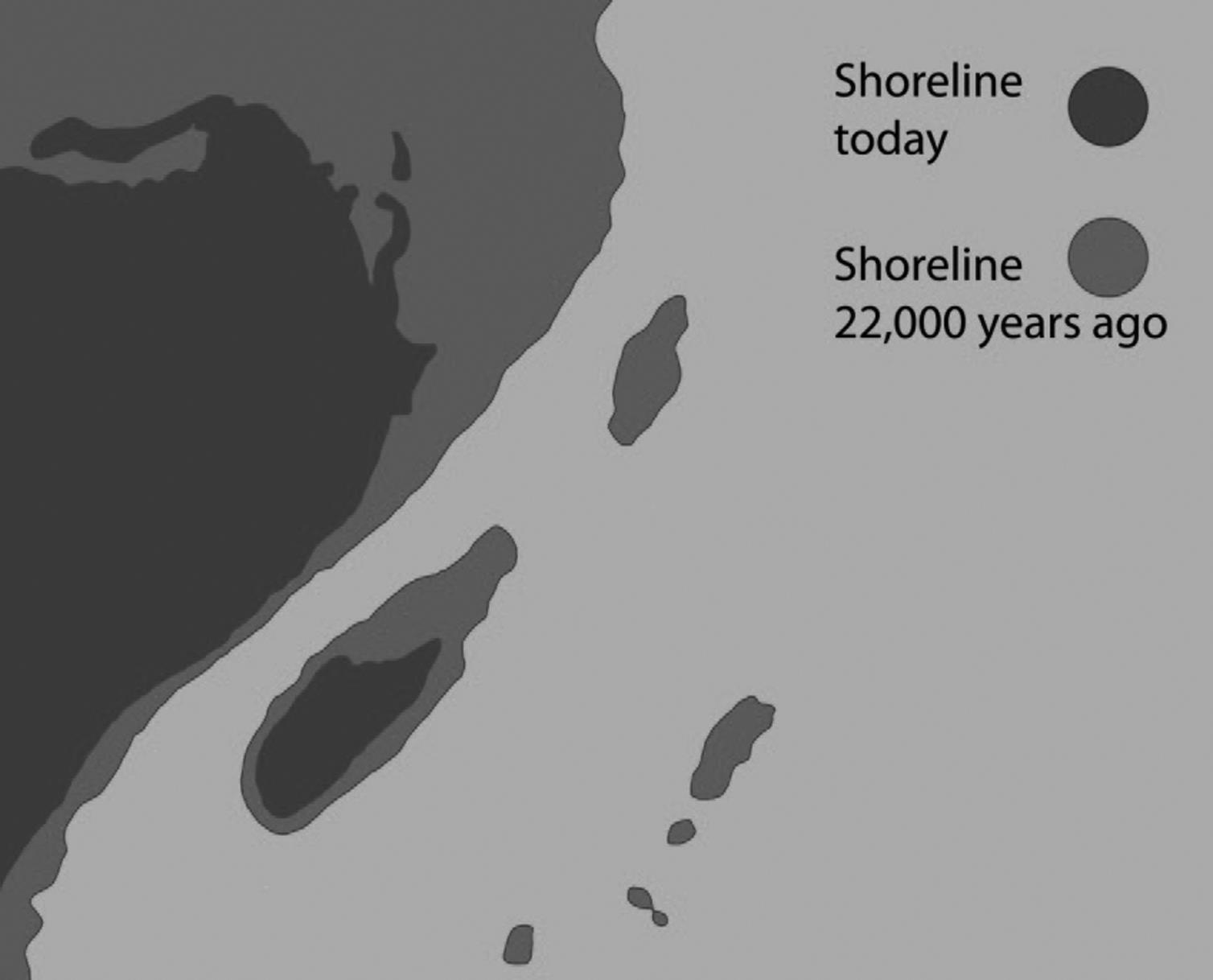 Above: A comparison of Cozumel’s shore line today versus 22,000 years ago. 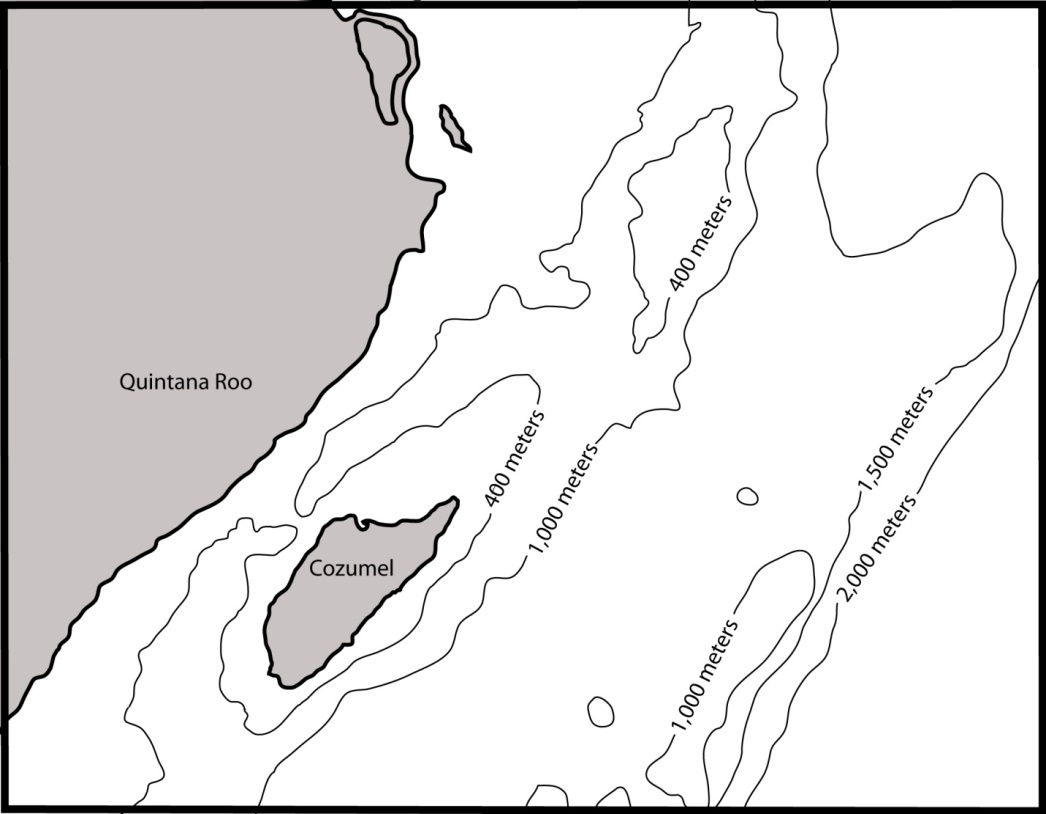 The island has been higher than sea level for the last 125,000 years. During that time, it was populated by many different types of plants that drifted to its shores as well as seeds blown in by the wind or carried by birds in their guts. Some of the plants that were NOT found on the island prior to the arrival of the Spanish in 1500s were: Coconuts, plantains, bananas, oranges, limes, and lemons. Other latecomers were the royal palm, the tall Australian pine, and the red-flowering flamboyán tree, which didn’t show up until the twentieth century.

Animals also were carried on currents or swam to Cozumel. Birds and bats flew to the island. These pioneer animals not only included the kinds we see on Cozumel today, but a few species that are now extinct, like the Pleistocene Era equine, Equus conversidens. The fossil bones of one example of this 11,000 to 12,000 year-old equine were discovered in the Sifa cenote in Cozumel. Sifa is one of the more than ten cenote openings that are connected to the La Quebrada underwater cave that has its sea outlet at the south end of Chankanaab Park. I mapped and excavated part of this underwater cave in the 1980s, excavating and conserving several Maya ceramics and pieces of carved jadeite that are now stored in the Mexico City Museo de Antropología e Historia. 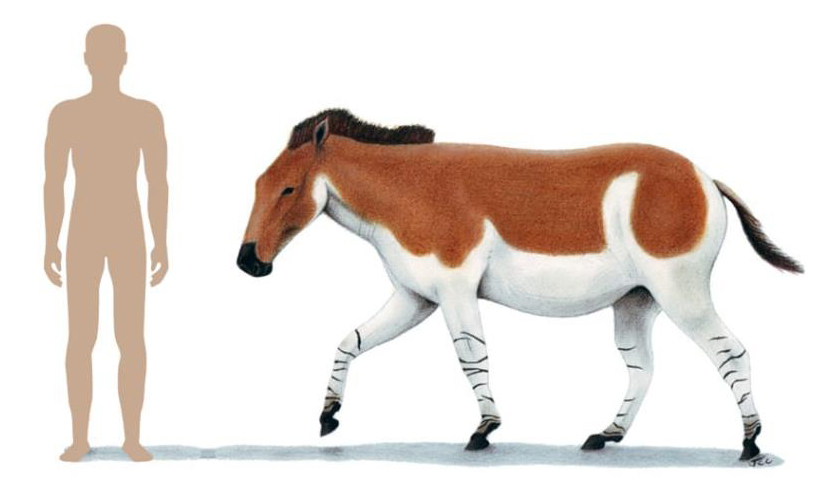 Above: A six-foot tall man in comparison to the extinct Equus conversidens (also known as the American onager).

There are similar cenotes on the mainland where divers found more remains of extinct prehistoric animals, including the charred and butchered bones of a camelid (Hemiauchenia macrocephala), bones of giant ground sloths showing cut-marks, giant cave bears, saber-toothed tigers, mastodons and more. Scuba divers on the mainland also discovered skeletons of more than ten Paleo-Indians who died in the caves 10,000 to 13,000 years ago, before the caverns were flooded. So far, no early human bones have been found in Cozumel’s flooded caves and cenotes, but one day the skeleton of a Paleo-Indian will probably turn up. If a horse could make it to Cozumel, obviously Indians could. We know these guys were venturing out from Yucatan and Quintana Roo to populate the western portion of the Antilles by 8,000 BC., later becoming what we now call the Casimiroid culture. If they could get to Cuba and Jamaica from Yucatan, they should have had no problem crossing the channel to Cozumel.

These Paleo-Indians would not have made much impact on Cozumel Island and left little to show they had ever been here: Hearths from seasonal campsites and debitage from flint nappers making their early archaic-type, chert projectile points. They made no ceramics, so that artifact is absent from the archaeological record. 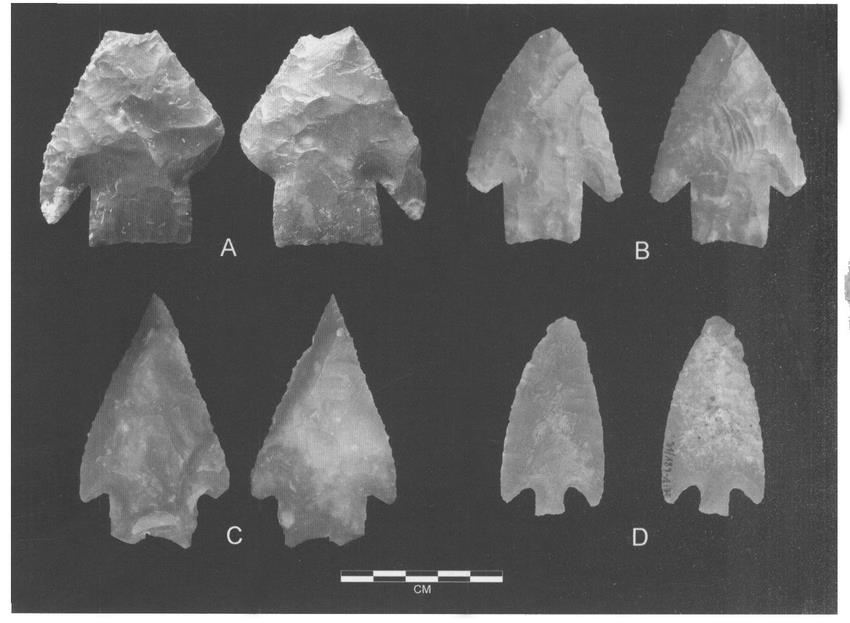 Above: Archaic points found in Belize. Photos by Jaime Awe.

Above: The chert projectile points were used to tip atl-atl (spear-thrower) darts, not arrows. The Paleo-Indians didn’t have bows and arrows.

Beginning about 11,650 years ago, during the Holocene Epoch, the ice sheets in the northern and southern hemispheres retreated and the sea-level rose, flooding the dry caverns on Cozumel and turning them into the water-filled anchialine caves and cenotes. When these caves filled up with groundwater from the rising water table, the percolating rainwater was no longer able to evaporate and deposit its calcium carbonate load, so the speleothems stopped growing when they were submerged. Today, scuba divers are exploring these underwater caves. But, when the freshwater table and sea level were lower until about 11,500 years ago, Cozumel’s caves were dry and any animal or Indian could enter in search of drinking water in pools at the bottom of the cave.

Nine hundred kilometers from the Quintana Roo coast, between Cozumel and the Caiman Islands is the Caiman Trench. This deep trench in the seafloor was formed by the subduction zone where the North American tectonic plate meets the Caribbean tectonic plate. Sometime shortly after 450 A.D., these two plates shifted creating a large undersea earthquake. The earthquake, in turn, generated a series of tsunami waves over 15 feet (4.5 meters) high. These tsunamis washed over coasts of the island of Cozumel, and then struck the Quintana Roo coast along a 150 mile (250km) long swath. The giant waves threw up a berm of boulders, coral, and sand sixteen feet high all along the Quintana Roo coast as far as 1200 feet (365 meters) from the beach.