How Palancar Reef and Palancar Beach got their names

There is an oft-cited story that Palancar Reef’s name was derived from a Spanish verb that means “to pole or punt a boat”. However, I don’t buy it. It’s true, palanca means a pole used as a lever in Spanish, but the word palanca can’t be turned into a verb in Spanish by simply adding an “ar” ending. To lever something is hacer palanca in Spanish. Besides, the Spanish name of the staff or rod used to pole or punt a boat is pértiga, not palanca. To pole or to punt a boat is impelar, empujar, o impulsar con una pértiga.

It seems that in the attempt to explain the etymology of the word, Cozumeleños (and others) grabbed at a similar-sounding word and tried to make it fit when the original meaning was lost to the common memory. The added embellishment to the story that fishermen needed (or wanted!) to pole instead of using their sails or oars (prior to outboards) so as not to scare the fish does not really “hold water” either. We are not talking about shallow-water flats at Palancar; the water there way too deep to reach bottom using a pole. Other versions of the story say the fishermen went there to cut slender palm trees to use as boat poles. However, using a palm tree trunk, which is both very heavy and very rough, instead of a smooth hardwood sapling (the most common boat palanca) just does not ring true to me. 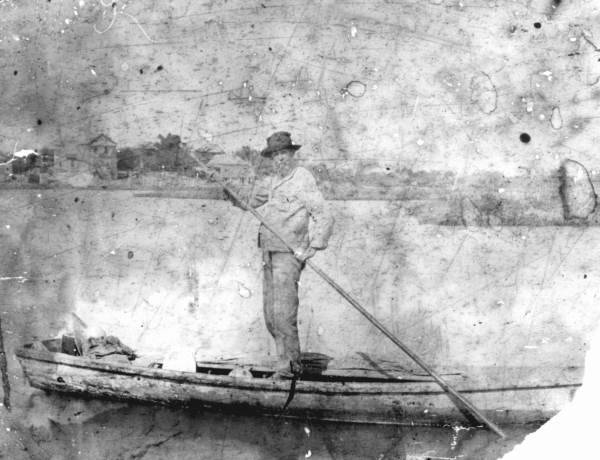 Above: To pole or punt a boat, which is “impelar, empujar, o impulsar con una pértiga” in Spanish.

My vote is that Palancar Point, Palancar Beach, and Palancar Reef all got their names from a nearby rancho that was named after its owner, in this case Palancar, a very good and proper Spanish surname. Most of the reefs off of Cozumel’s west coast are named after sites located on the shore adjacent to them. Punta Francesa (Francesa Reef), Punta Tormentos (Tormentos Reef), Punta Tunich (Tunich Reef), and Paso Cedral (Paso Cedral Reef) are just a few examples. Many other reefs and beaches are named after old adjacent ranchos: Rancho San Clemente (San Clemente Reef), Rancho San Martin (San Martin Beach), Rancho Paraiso (Paradise Reef), Rancho San Francisco (San Francisco Beach) and Hacienda Colombia (Colombia Reef). There are a few outliers to this “rule.” Cardona Reef was named after Rene Cardona who filmed there in the 1950s, and Barracuda Reef is self-explanatory. The Bricks was named for the load of bricks from a shipwreck at that location.

The earliest mention of Palancar on Cozumel I can find is the “Punta Palancar” described in a 1901 Mexican government report.