I recently received a request from a local editor for an article based on the theme “A New Cycle” and thought it might be interesting to write something on the subject, especially since I am in need of one. Mine was stolen recently; just one more of the dozens of bicycles that disappear here on the island every month. Where they all go and how they get there is anybody’s guess. I guess I should be grateful that car-theft is not the problem here as it is elsewhere. But then again, a fly buzzing around in tight circles inside a bottle comes to mind when I think of car-theft in Cozumel.

After some more thought, I realized that the kind of cycle the editor was most likely asking for was some kind of feel-good article about fresh starts or new beginnings. I guess if I had to write about that kind of cycle, it would probably be about something like the ancient Mayans’ B’ak’tun 13 and their supposed “end of the world prophesy,” an event some say we can look forward to on December 21, 2012. [Spoiler alert!! It didn’t happen. I wrote this article in early 2012] Although I’m not taking the prediction seriously, many folks are. I read in the news that our own [now defunct] MayAir airline has decided to promote 2012 as the “Year of Catastrophe,” the wisdom of which I question. I’m sure there will be a slight increase in new-agers traveling to the Mayan Riviera in December, but whether or not that will have much of an impact on Cozumel’s economy, I can’t say. I suppose the really serious new-agers will be flying in on one-way tickets and maxing out their credit cards while they are here. That could give us a slight bump, I guess, but when December 22 rolls around and they wake up to a bright new day instead of being reborn into a bright new millennium, the credit card companies may be receiving some frantic calls disputing some of their most recent charges.

I got to looking into this idea of an impending apocalypse and realized that, just like so many of the doomsayers that came before, these eschatologists (those who study when the end will come; not to be confused with scatologists, those who study what comes out of our ends) have it completely wrong. The Mayans never predicted the end of the world, just the end of their calendar’s cycle. That was because, unlike today’s modern perpetual calendar, theirs had both a starting date and an ending date.

We’ve all seen the mechanism that looks like a geared wheel-within-a-wheel riding along the outside of a third, larger geared wheel, which the Mayans used to form their uniquely-named dates. This mechanism, called the Calendar Round, was made up of Tzolk’in calendar (which has a 260 day year and is the pair smaller wheels) and their Haab’ calendar (with a 365 day year and is the larger wheel that the Tozolk’in pair ride along). By rotating the wheels by one gear tooth every day and noting the names of the three aligned gears, priests would assign a three-part name to each new day for 52 years. After that, the Calendar round started repeating itself. 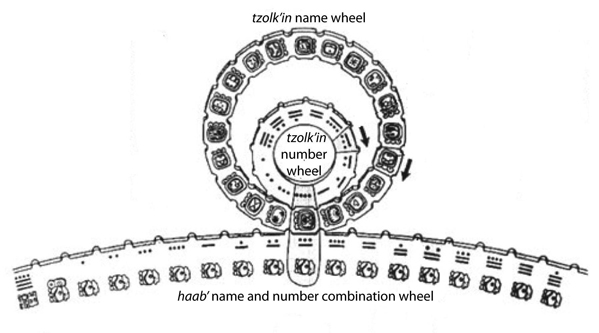 Above: The Maya Calendar Round, made up of the Haab’ (365 day year) and Tzolk’in (260 day year) calendar wheels

To record dates that occurred farther back (or forward) than that 52-year-period, they needed a different way to assign a unique identifier to a specific date. The solution they came up with is called the “Long Count.” Instead of geared wheels, the Long Count system was actually more like the drive gear wheel of an army tank running along a broken tread. When the drive gear reaches the loose end of the tread, it goes off the track and into the mud. The Mayan Long Count calendar reaches the end of the “tread” every B’ak’tun (a period of 394.3 solar years), then needs to be reset and put back at the beginning of its broken tread. So far, it’s been reset 13 times; hence our current period, B’ak’tun 13.

Between the years 1905 and 1935, archeologists J. T. Goodman, J. H. Martínez, and J. E. S. Thompson made some calculations, based mostly on a Spanish scribe’s text written in 1539, that put the start date of the Mayan calendar at August 11, 3114 BC. So, if you use their correlation of the Mayan Long count to our Gregorian calendar (or the G.M.T. correlation, as it has come to be called, not to be confused with Greenwich Mean Time) to determine the Long Count’s start date, the next “end-of-the-tread” date is December 21, 2012. I guess the Mayan i-tech who originally designed their calendar was a lot like the whizz-kids who designed our old computer software to only recognize the last two digits in a year’s date. Remember Y2K? Short sighted at best. But then again, I can’t remember the last time I saw anyone here in Quintana Roo write out a check using a date in the Mayan Long Count, so maybe the fact it will come to an end is not really all that important. The only guys I figure it will actually affect are the silver-trinket hustlers on the square in Merida. They all will need to tweak their sales pitches. The last time I was there, one of them approached me and tried to sell me what he insisted was a silver replica of the Mayan “perpetual” calendar. “Why,” I asked him at the time, “would I want to buy a perpetual calendar that will only work for a few more months?”

When the current B’ak’tun number 13 comes to its end, I guess we could wind the Mayan clock “back to one,” and start it up again for another 394.3 years, but what’s the point? It may be better if we all here on Cozumel just climb on MayAir’s bandwagon and start advertising things like a “Have your Last Supper at Las Palmeras,” or “When the Rapture comes, enjoy it 130 feet down with Rapture of the Deep Divers!” Who knows? Maybe we could lure more of those end-time travelers into spending their money here.

However, as interesting this new advertising gimmick may be, I have some bad news. The G.M.T. correlation has recently (three years ago, but that’s a blink of an eye in Long Count time) been called into question. Dr. Andreas Fuls, an archeoastronomer of the Technical University of Berlin, believes that the Mayan’s celestial-mechanical calculations of the orbit of the planet Venus (as well as their records of eclipses, conjunctions, maximum elongations, and heliacal aspects) depicted in the 900 year old Dresden Codex (one of only three Mayan books to have survived the Spaniards book-burning during the inquisition) do not coincide with the G.M.T. start date of 3114 BC, but rather push the whole Long Count forward another 208 years! I guess that means that now we have until 2220 to promote the coming of Armageddon.