Useful Info on the Town of San Miguel

Cozumel has several paved bike and pedestrian paths. One goes along the northwest quarter of the island, following along the Carreterra San Juan Boulevard, from near the “airplanes on pedestals” by the Mexican Airforce base just north of downtown, and running on the west side of the boulevard to its northern end. From there, there is a paved rad that leads to the sewer plant, but it is not a designated bike path.

A second designated bike path runs along the west edge of the Carreterra Costa Sur from Avenida Andres Quintana Roo (11th Avenue) south to the Puerta Maya Pier. It skips a section, then picks back up again as the eastern lane of the old coastal highway south to the Punta Sur Park. This section can be tricky, as the western lane of the old highway is open for car traffic southbound only, but sometimes tourists get confused and drive their rental cars and motos on the eastern lane by mistake.

The next section is a bike and pedestrian path that is the old eastern highway, running from Punta Sur Park north to Sr. Iguanas Bar at the junction of the Old Eastern Highway and the Transversal (Cross-island) Highway.

The Carreterra Transversal, the highway that cuts across the island, has the right lane on both sides of the highway reserved for bicycles only. IT IS NOT a passing lane, nor a lane for motos.

The city of San Miguel de Cozumel is divided into various neighborhoods, called colonias. The term colonia is the official designation of a municipal-government delineated residential or mixed-use area and has a recognized border.

There are also neighborhoods that are called fraccionamientos (subdivisions) or areas of land that have been sub-divided into residential lots by a developer and sold off one by one to homeowners. Fraccionamientos may or may not lie within a colonia, but their borders never overlap. If a fraccionamiento is built outside of the borders of any colonia, it will most likely be re-designated as a colonia itself sometime in the future.

A few of the colonias in Cozumel were built up in sections, such as San Gervasio 1 and 2, or Flamingos 1 and 2. Most of the time, the sections of the colonia developed later are merged with the earlier section to become one combined colonia, and the original 1 and 2 sufixes are no longer official. However, in the case of the Colonias San Miguel 1 and San Miguel 2, the two sections became independent colonias, with the fraccionamientos of San Miguel 3 and the fraccionamiento of Flores Magon 3 (not to be confused with the colonia of Flores Magon located farther to the north east) incorporated into San Miguel 2.

Other geographic place names have also been superseded by newer names over the years, but the older names continue to be used by locals. The name of the colonia Gonzalo Guerrero was changed to Colonia Andres Quintana Roo, but nowadays you can see them both used interchangeably in daily use.

Zonas are the commercial equivalent of a colonia. On Cozumel, there are the Zona Hotelera Norte, Zona Hotelera Sur, and Zona Industrial.

Another type of geographical division in the city is the parroquia, or parish. This ecclesiastically named area is always centered around a Catholic church. In Cozumel, the area commonly called “Corpus Christi” is actually the parroquia of Corpus Christi, which covers the colonia of Andres Quintana Roo as well as parts of the surrounding colonias. 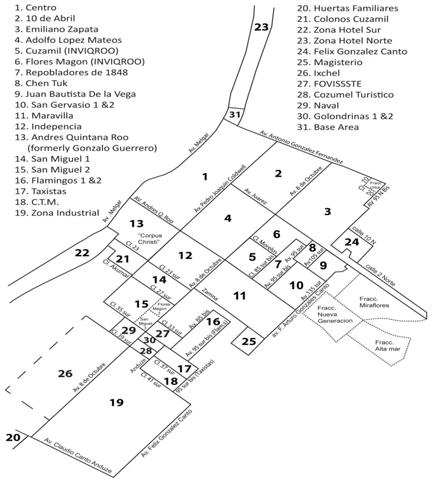 Some time back, the city placed a new type of oval street sign at many of the town’s intersections. These new signs show the street name, the direction of traffic flow (as indicated by arrows), the zip code (codigo postal) and the name of the colonia where the sign is located. The problem with the signs, though, is that there was some miscommunication between the department of the government that erected the signs and the post office, so in some cases the zip codes printed on the signs do not coincide with the zip code the post office recognizes as the one for that colonia. Some colonias have their own zip code and others share a zip code with one or more other colonias. 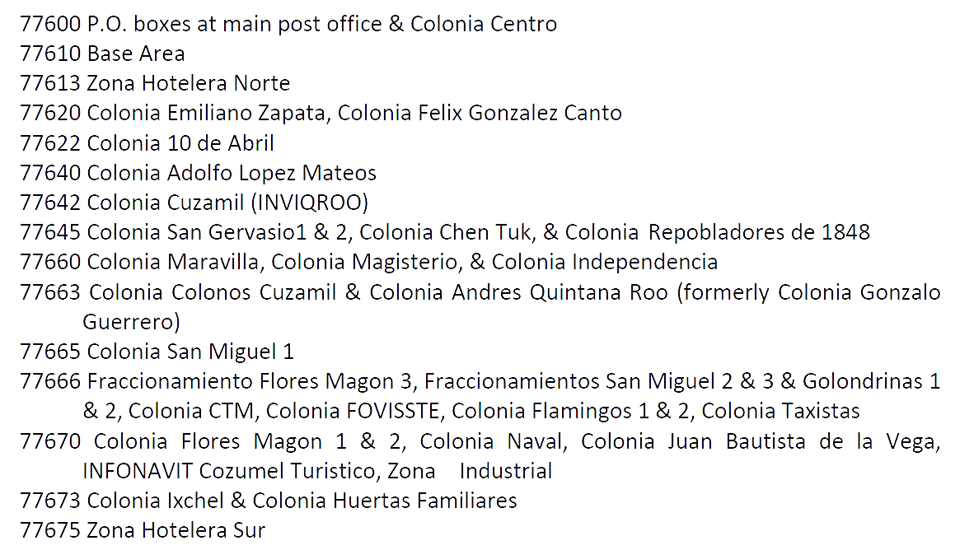 The mislabeled street signs are not the only misleading directions you will run across here on the island. Many streets and avenues that were once indicated by a numeric designation have had that designation changed by the Ayuntamiento to a name to honor a person or a famous place, or a date to honor an historical event. Avenue 30 became Avenue Pedro Joaquín Coldwell. Avenue 65 became Avenida 8 de Octubre. Calle 11 Sur became Avenida Andres Quintana Roo. Calle 15 Sur became Avenida Xelha. These last two changes broke the old, long standing rule that avenues (avenidas) ran north-south and had the right-of-way while streets (calles) ran east-west and had stop signs. Some of these new names may make you sound like a time traveler (as in “I live on 8 de Octubre, in the Colonia of 10 de Abril”), however, these name changes (and many other examples of street name changes not mentioned) are often ignored by locals, who continue to use the old numeric designations of streets when giving directions.

As the city grew, the newer sections were often plated and built as unconnected fraccionamientos and only later tied into the city’s network of streets and avenues, sometimes with odd results. If you travel south on Calle 90 Sur in Colonia Flamingos, the street becomes Calle 85 Sur at the intersection of Avenida 35, as you pass into the Colonia Taxistas. Traveling south on 8 de Octubre, at one point the streets on the right are numbered (in this mind-numbing order) “23, 1, 25, 5, 27, 13, 31, and 35.”

The city also made liberal use of the Spanish word “bis” (meaning “repeated”) when naming streets. There are many examples of a street having a number designation like Avenida 10 (10th Avenue), only to have the next street over named Avenida 10 bis (10th Avenue Repeated). This to the extreme in Colonia Repobladores de 1848 where you can find an extension of the numeric name to cover more than one street is carried Calle 3 sur, next to a Calle 3 Sur A, next to a Calle 3 Sur Bis.