Skip to content
Monument to Los Niños Heroés in Cozumel

The monolith in middle of the esplanade on Avenida Melgar across from Pama honors the six men Mexico calls the Niños Heroés (child heroes). These men were army officer-candidates, who died defending the Chapultepec Castle national military college in Mexico City against the American forces during the Mexican-American War in 1847. 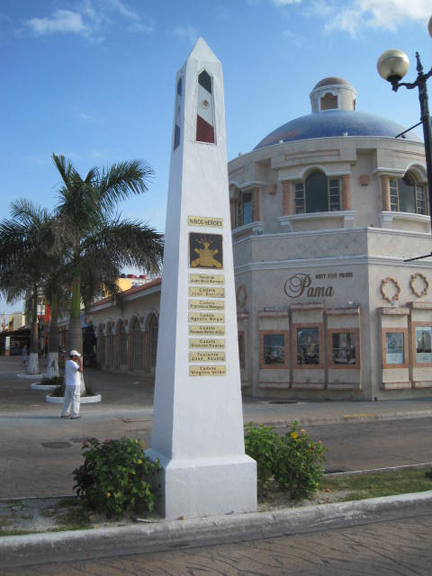 The college was analogous to the West Point Academy in the US. The six army cadets were part of the group of over 400 castle defenders. This number was composed of the army cadets and members of the military college’s faculty of officers totaling around 100 and another 300 or so Mexican Army regulars who were under the command of Lieutenant Colonel Felipe Xicoténcatl. (The ex-US minesweeper donated to the Mexican Navy and sunk off the shore of Cozumel for a wreck-dive site was named after this general.) General Nicolás Bravo had assigned Col. Xicoténcatl to hold the castle while General Antonio Lopéz de Santa Anna regrouped and prepared to defend Mexico City. When the Americans began the attack, General Bravo ordered the defenders to retreat, but the legend says six cadets refused to abandon their posts. The six were Lieutenant Juan de la Barrera (age 19) and cadets Agustín Melgar (age 19), Juan Escutia (age 20), Vicente Suárez (age 17), Francisco Márquez (age 14) and Fernando Montes de Oca (age 18). As can be seen by their ages, the term “child heroes” is a misnomer. Only Francisco Márquez was what could be considered an adolescent. All the rest were men, attending the nation’s most prestigious military academy as candidate officers.

According to legend, Juan Escutia wrapped himself in the Mexican flag and jumped off the castle wall to prevent the flag from falling into enemy hands. You just can’t make this stuff up (but, somebody did!). This is now taught as history to every Mexican schoolchild. The date the “boy” heroes died, September 13, is a Mexican National Holiday.

In 1947 the Mexican government excavated a mass grave at Chapultepec. A commission appointed by the president chose the six smallest skeletons and certified them as the official remains of the six fallen officer-candidates. They erected a monument commemorating them, and then their “officially-recognized” remains reinterred elsewhere.

The Mexican national military academy was at the top of the 200-foot-tall Chapultepec hill, and surrounded by a 12-foot-hgh stone wall. Its 400 defenders outnumbered the US Marines by nearly 2-to-1. They also had several cannons and howitzers plus the advantage of the high ground. The detachment of US Marines that fought in the battle sustained such a high casualty rate that afterwards, the buff-colored stripe that adorned the side of the Marine’s dress uniform trouser leg’s was ordered changed to a red stripe and is now known as the “Blood Stripe.” The Marines also memorialize this battle in the opening line (“From the halls of Montezuma…”) of their official hymn. American officers who participated in the battle and later became famous were Robert E. Lee, Winfield Scott, George Pickett (famous for “Pickett’s Charge” at Five Forks during the US Civil War), and Ulysses S. Grant.