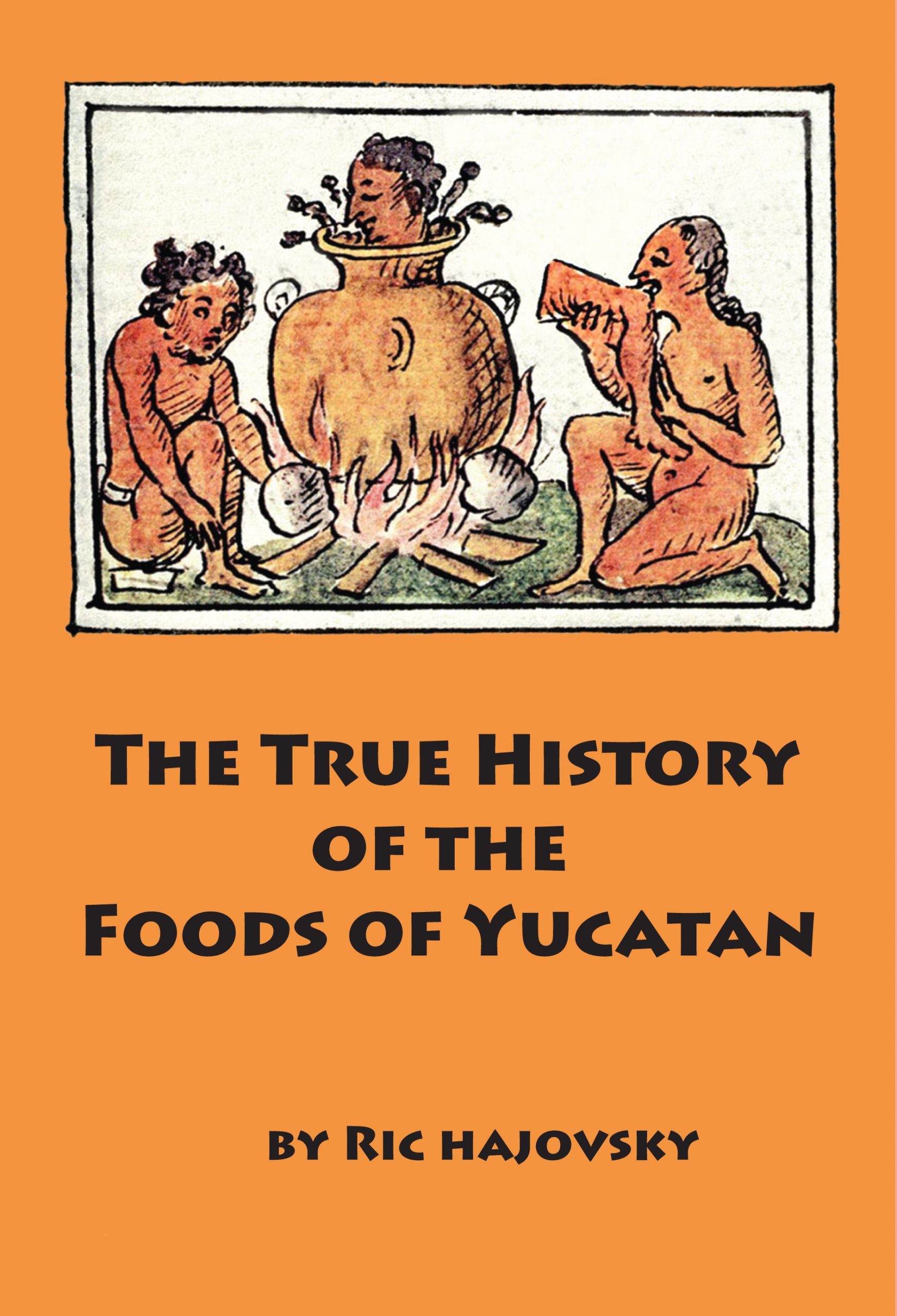 The True History of the Foods of Yucatan is NOT a cook-book. This non-fiction work tells the story of Yucatan’s history through its food. It details the true origins of the foodstuffs, recipes, and ingredients that are now used in Yucatan cuisine. It also delves deeply into the food-ways of the pre-Columbian Maya and shows how Maya food of the past was completely different than today’s foods that are so often labeled “Mayan Food” by people trying to establish a connection to an imaginary past.

Many gastronomical myths promoted by clueless internet authors are dispelled by the inclusion of the true origins and etymologies of such iconic Yucatan recipes as queso relleno, papadzules, cochinta pibil, pastel del tres leches, and dozens more. Even the true origin of the humble tortilla will amaze.

The True History of the Foods of Yucatan is available from Amazon Books in eBook or paperback editions HERE. Para recibirlo en Mexico, cliquea AQUI.

For some authentic and tasty Quintanarroense recipes, try Pancho’s Backyard Restaurant, on Ave. Melgar between Calle 10 and Calle 8

For a real fresh-roasted cup of coffee, you must go to Coz Coffee, Cozumel’s premier coffee roaster and coffee shop.

Today, Cozumel has a wide variety of cuisines available to the hungry traveler, but instead of describing these recent-to-Cozumel gastronomical fares, the following will help shed some light on the typical, traditional, Cozumeleño dishes.

Aguas Frescas. The US has lemonade. In Quintana Roo, we have lemonade, limeade, orangeade, watermelon-ade, guanabana-ade, and many other varieties. They can be made with either agua natural (still water) or agua mineral (sparkling water). A few of the many popular flavors are:

Licuados. Many of these same fruits that are used to make aguas frescas can be had as licuados, a drink made from chunks of fruit (not just the juice) mixed with water and sugar in a blender and served over ice cubes. They can also be made with milk (Licuados con leche). The US has milkshakes. In Quintana Roo, we have licuados con leche. These thin, but refreshing, milkshakes come in several flavors:

Horchata. This is a traditional, sweet, milky-white drink made from rice, almonds, sugar, and cinnamon.

Agua de coco. Agua de coco is the clear, refreshing liquid found inside the ‘pipa,’ or immature coconut, often advertised as coco frio. It is absolutely nothing like the canned ‘coconut milk’ in US stores.

Ice Tea. If you order Ice Tea (te frio or te helado) in Cozumel, you will get instant ice tea.

Xtabentun is a local alcoholic bottled beverage that is made from honey (traditionally from honey made by the wild, stingless bee of Yucatan), anise, and rum. A very nice digestive.

Michelada is a new arrival from the North of Mexico, a cold beer served with salt, lemon and sazón (sometimes the sazón is soy-sauce based, sometimes Worcestershire sauce, and sometimes Maggie sauce).

The traditional tortilla in Cozumel is a small corn tortilla, but these days many places also have flour tortillas for the immigrants from Central and Northern Mexico. This little, round, ground-corn flat-bread is the building block of many of Cozumel’s most treasured foods. It is served by the stack with most traditional meals to use as a pusher, sop, taco-wrapper, or just to eat as an accompaniment to the meal. When cut into triangles and fried into crisp chips, they’re called totopos.

Tortillas used in snacks or as part of the main dish

Salbutes. Take a fat corn tortilla, fry it until it puffs up, add shredded roast chicken, lettuce, onion, tomato, avocado, and a slice of jalapeño and you got a great snack called a salbute.
Panuchos. Take a flat, crispy, fried corn tortilla, top it with shredded roast chicken, black beans, tomato, lettuce, and avocado, and you got a panucho.
Papadzules. A corn tortilla, soaked in a thick chicken and pumpkin seed sauce, wrapped around a stuffing of chopped, hard-boiled eggs and covered with the same thick sauce used to soak the tortilla.

A meat filling wrapped up in a corn tortilla. In Cozumel, all tacos are soft ones and typically made with corn tortillas.

Enchiladas. Just like the ones in the US, but never made with that dark, chili gravy so popular in Tex-Mex cooking. They can come in one of 4 varieties:

Sincronizadas. A hot ham and cheese sandwich made with tortillas instead of bread.

Quesadillas. Tuck some fresh cheese into a doubled-over tortilla and grill until the cheese melts and you’ve got a quesadilla. Shredded, roasted chicken, or fried chorizo can also be added to these little snacks.

The word tamales is the Spanish plural of tamal. Only Americans call one tamal a tamale. The masa (ground nixtamalized corn and fat) used to make tortillas is also used to envelope a variety of fillings and steamed in a banana leaf to make tamales (de puerco or de pollo). Sometimes cinnamon and sugar is added to the masa to make a dessert tamal.

Mucbipollo (a large cake of baked masa stuffed with chicken, bean, and egg, served only around Halloween)

Note: In Spain, a tortilla is an egg and potato omelet. These are now being served in some Mexican restaurants now under the name Tortilla Española, not be confused with a Mexican tortilla.

Coctel (Coctel de Mariscos) is a seafood cocktail made with your choice of seafood and a thin, tomato-based sauce.
Coctel de Camarones is shrimp cocktail.
Coctel Campechano is a mixed seafood cocktail.
Vuelve a la Vida is a cocktail made of raw oysters, shrimp, octopus, and their juices, which is purportedly good for hangovers.
Ceviche is seafood marinated in lime juice, cilantro, onions, and tomatoes. It comes in various versions: Octopus (Pulpo), Fish (Pescado), Conch (Caracol), Shrimp (Camaron), all of the above (Mixto)
Tuchitos (means “little bellybuttons” in Mayan). It is chopped-up conch eyes and mouth parts in ceviche.

Caracol is conch
Cangrejo is crab
Jaiba also means crab
Ostion is oyster
Langosta is Caribbean lobster
Pulpo is octopus
Huachinango is red snapper
Pargo is snapper
Basa is imported Chinese catfish
Robalo is snook
Lisa is mullet
Pez León is Lion-fish
Anchoa is anchovy
Tiburón is shark
Cazón is nurse shark
Mero is grouper
Jurel is horse mackerel
Calamar is squid
Camarón and gambas both mean shrimp
Pez espada is swordfish
Boquinete is hog fish (if you want a whole fried fish, this is the best)
Boquilla is white grunt
Chac Chi (red mouth, in Mayan) is a French grunt

Beef is not Yucatan’s strong point. Pork is the popular meat here. If you do order a steak, here is how to order it:

Suadero (a contracted version of sudadero) means “sweat-blanket” or “saddle blanket,” but is now the colloquial term for an oddly smooth-textured piece of meat cut from an area between the upper leg and the stomach of a cow or steer. It is often grilled and then chopped-up to be served in tacos in Cozumel.

Arrachera is the cow’s diaphragm, the muscle that separates its chest cavity from its belly cavity. In the US it’s called the “skirt.” It is not the same as “flank” steak, which is a part of the abdominal muscles of the cow. Skirt steak is divided into two parts, the “inside skirt” and the “outside skirt.” The outside skirt is normally what you get when you order arrachera in Cozumel. This tough piece of muscle needs to be marinated in some kind of meat-tenderizer in order to make it chewable. It is also served cut across the grain. The piece of diaphragm gets its name from its similarity in looks (and texture!) to an arrachera, a regional name for a saddle cinch, the belt that goes underneath the belly of a horse and is used to keep the saddle from falling off.

Beef Fajitas are the Tex-Mex version of either grilled flank or skirt steak, which are served cut into strips and served on a hot cast iron griddle.

Rostizado means rotisserie
al Carbón means charcoal grilled
Mole is a chocolate, sesame, peanut, and pepper sauce
Relleno Negro is a black blend of spices (called chimole) is used to make a broth in which a chicken (more traditionally, a turkey or pavo) is slow cooked.
en Escabeche is a way to serve marinated or pickled chicken along with the cooked marinade
Pollo Pibil is chicken basted in achiote and bitter orange and baked in a banana leaf

Eggs are served in a bunch of different ways here. Some of the most popular ways are:

Some other recipes you should try while visiting Cozumel are:

Queso Relleno. A whole round of Edam cheese, hollowed out and stuffed with ground pork, and then baked in a creamy sauce studded with raisins, capers, green olives and onions.
Polkanes. “Snake-heads,” pumpkin-seed masa fritters.
Papadzules. Tortillas wrapped around boiled egg and covered in pumpkinseed sauce.
Kibis. Fried fritter of wheat bulger, ground meat, spearmint, & onion.
Relleno Negro. A chicken (traditionally, a turkey) is slow cooked in a broth made with concoction of burnt chilis and spices.
Frijol con Puerco. Black beans, chunks of pork, and Mayan herbs are slow simmered for many hours. Traditionally, the soup is de-constructed and each ingredient served separately; beans, broth, and pork all go in their own dishes. Garnished with cilantro, chopped radish, minced onion, each diner then re-mixes the ingredients with steamed white rice into his own, personal blend, in his own plate.
Puchero. A three-meat stew.
Helado de Elote. Fresh corn ice cream. Try it. You’ll like it!
Xnipec. A very hot salsa made with habanero peppers. The word means ‘dog’s nose’ in Mayan, because it makes your nose run (your eyes will, too!)

Fruits (Frutas) you may be unfamiliar with, but you should try:

Guanabana is sour-sop, in English
Naranja agria or sour-orange (for cooking only!)
Pitaya or dragon fruit, a hot-pink and green fruit with a sweet white center speckled with tiny black edible seeds.
Mamey is a football-shaped fruit with a brick-red meat. Very tasty.
Chico Sapote is the fruit of the tree that makes chicle, the sap once used for chewing gum. Tastes like a pear sprinkled with cinnamon!
Caimito is a star apple
Sapote Negro is a fruit whose pulp looks and tastes like chocolate-pudding
Papaya
Anona is cherimoya
Zaramullo is sugar apple
Guayaba is guava and can be served as a fruit or as a fruit paste, Ate de Guayaba.
Nance is hogberry
Mamoncillo is guinep
Membrillo is quince and is served as a fruit or a fruit paste, Ate de Membrillo
Nopales (cactus pads) is similar to taste and texture to okra.
Chaya is a plant leaf found in the Yucatan that is used as a flavoring ingredient in soups, casseroles, deserts, and drinks.

Esquites are corn kernels served in a cup with mayonnaise and other toppings, like powdered chili.
Jícama is a tuber that tastes similar to water chestnut. It is often served with lime and powdered chili.
Chayote is a mirliton squash.